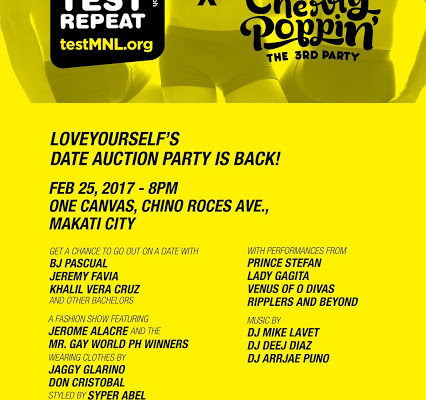 It’s that time of the year again to pop your cherries! The chill air is still adrift, but this February 25, things will heat up with Cherry Poppin’ – The 3rd Party, the third installment of LoveYourself’s date-auction event for HIV awareness.

On the 25th of this love month, the Philippines may be commemorating the 31st anniversary of the People Power Revolution, but LoveYourself gives you yet another reason to celebrate. Join their revolutionary event, which will be held at the One Canvas Events Place, 2235 Don Chino Roces Ave., Brgy. San Lorenzo, Makati City. The party starts at 8 p.m. and will last until 3 a.m. the following day. Don’t miss this gathering of 14 gorgeous bachelors, who will be up for grabs at the auction. Your participation will help the cause, too, as proceeds from the event will fund the opening of a new community center by LoveYourself this year.

Third parties aren’t just for couples. Veering away from the drama and scandal almost always associated with it, LoveYourself will prove that not all third parties are bad.

Similar to its predecessors, this year’s Cherry Poppin’ will culminate in an auction where participants bid for their auctionee of choice. This year, the auctionees come from different professional fields and walks of life – from TV chef Jeremy Favia and celebrity photographer BJ Pascual to an alter personality – so there are plenty of flavors to tickle your taste buds.

Tickets are at ₱300 each, inclusive of 1 alcoholic drink of your choice and admission to the auction, where the winning bidder will get a chance to date one of the auctionees. Like last year, a fashion show will also be held. You’ll get to see the eligible bachelors (and your would-be date) fire up the runway wearing the hottest styles of 2017. To top it all off, the event will also showcase dazzling diva performances, house music from DJs Kio Priest and Mike Lavarez, and lots of surprises in store.

So how did the love for the third party really come about? It was February 2015 when Cherry Poppin’ started off as a singles soiree, a poolside party-slash-auction where a date with an eligible bachelor was up for bidding. Its success led to Cherry Poppin’: The Second Comin’ last March 2016, which added a fashion show as another highlight. And its success – yes, you got that right – led to this year’s Cherry Poppin’: The 3rd Party.

So what are you waiting for? Let’s party the love month away (with a cause) at LoveYourself’s Cherry Poppin’ – The 3rd Party. For tickets, log on to go.loveyourself.ph/cherrytickets. For reservations and queries, you may contact 0917-860-8244. 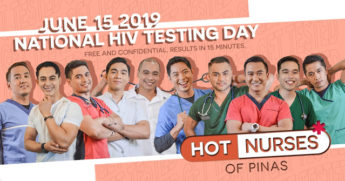 Your First Time with The Hot Nurses of Pinas: Starting a Habit 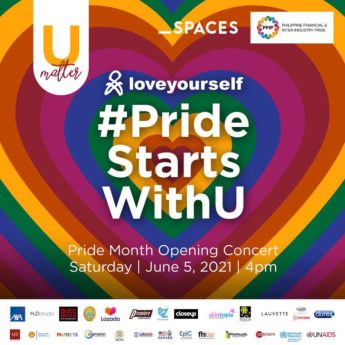 Pride Starts With U: An Online Celebration to Kick Off Pride Month 2021