Your First Time with The Hot Nurses of Pinas: Inspired to Advocate

Recall that moment when you did something for the first time. Some people would have sweaty palms and parched throat but still be game and giddy in anticipation. Others would try to keep a cool facade despite the looming anxiety inside their chest.

In this year’s Hot Nurses of Pinas on National HIV Testing day we invite you to experience HIV testing for the first time. This coming June 15, 2019, together with our partner CBOs, the gorgeous nurses we have scouted will guarantee that your first time testing experience will be safe, sweet, and swift. Still need convincing? Well let our hot nurses share their first time experiences with you!

Our lineup of Hot Nurses are not anymore new to the advocacy. Some of them have been part of the movement before becoming faces of the HIV prevention and awareness campaign. Nurses Mark, Clay, and Mikee have all taken part in spreading awareness through people who have inspired them to make a change.

“Through social media, there are videos that I can share on Facebook. At least my friends will be more aware and they can learn more about HIV. By doing that mawawala yung takot or yung stigma na magpa-test sila,” added Nurse Clay who believes that knowing your status through regular testing and keeping yourself informed is always the best way to address doubts and confusion about HIV.

Nurse Mark, on the other hand, has been involved as former head of LoveYourself Operations. He mentioned that his involvement in the campaign is his way of paying it forward within the organization: “I think by providing health teaching to clients, giving information regarding HIV infection, the transmission itself is a good way to inspire and encourage people na magpatest. As a healthcare practitioner this is what I have been doing to help the advocacy.”

Nurse Mikee also has close friends from LoveYourself so he has already witnessed the organization’s impact in curbing the HIV epidemic in the country. He has encouraged some of his patients who were diagnosed with HIV to undergo treatment because it’s free. Just like Clay and Mark, he takes the time to educate his acquaintances about HIV, how to prevent it, and how to minimizethe stigma surrounding it. Joining this year’s campaign has made Mikee immersed in LoveYourself’s community activities and it has also allowed him to have a more extensive reach in educating people about HIV.

As advocates prior to joining the campaign, our hot nurses are ready to prove that their knowledge and awareness of the HIV advocacy goes beyond gorgeous form. Their passion to spread awareness and fight the HIV stigma stems from people who have made ripples of positive change in their community. 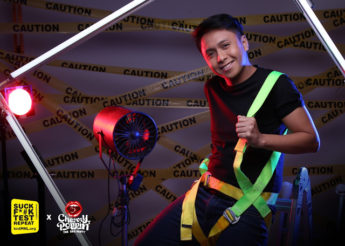