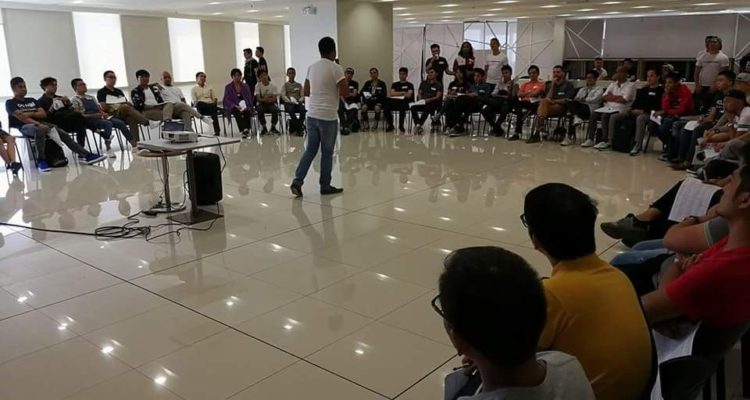 Similar to this year’s batch Guinto, the batch name “Marcelino” is also a tribute to a former location of a LoveYourself clinic.
The first clinic, LoveYourself Hub, was originally located at Leon Guinto St. in Manila. HIV testing and counselling was held at the hub from July 2012 until its transfer to 1936-B San Marcelino Street near the corner of Quirino Avenue in Manila. Citing accessibility as the main concern for the relocation, LoveYourself Hub resumed its operations on January 3, 2015.

The logo for Batch Marcelino is a spinoff of the acclaimed Windows of New York Project, which is a weekly illustrated atlas of striking windows along the streets of the Big Apple. Conceptualized as a tribute to the second hub, Mark Long, the artist behind the logo, took into account the ancestral vibe the place exuded. The logo shows a three-unit building with a red, white, and green motif. The middle unit was the second clinic of LoveYourself.

Operations at the LoveYourself Hub at Marcelino St. lasted only until December 2015. Frequent flooding at the hub instigated the transfer to a new venue at Taft Avenue, which is known up to this date as LoveYourself Uni.

With the addition of Batch Marcelino, LoveYourself has now more than 800 volunteers. With its partnership with Test MNL, Pilipinas Shell Foundation, ISEAN HIVOS, RITM-DOH, and the Taguig City Government, LoveYourself continues to be a champion for HIV awareness and prevention amidst increase in the number of new cases. It continues to be a rallying point for the advocacy, where volunteers, new and old alike, strive to serve their best in its two HIV testing clinics (LoveYourself Anglo at Shaw and LoveYourself Uni at Taft), engage in its various committees, and support its future projects and endeavors (like PrEP, for example).

As LoveYourself welcomes Batch Marcelino, Vinn Pagtakhan, the organization’s founder, is reminded of the journey, a few years ago, in finding a safe space for everyone, a place where we can be ourselves and where we feel safe and free from judgment and discrimination. Marcelino reminds him of an urban imagery of a little warrior: young, charming, strong, and very enthusiastic. And as new LoveYourself volunteers, he welcomes Batch Marcelino as our “youngest warriors in creating positive ripples of change for our community, and empowering that same community in developing a high sense of self-worth.”

Innovating in times of crisis: Giving virtual consultations (Part 2 of 3)