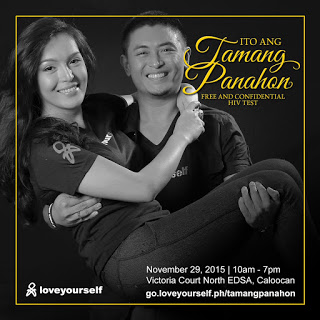 Banking on the popularity of soap operas and the #AlDub phenomenon, LoveYourself embarked on a campaign bolstered by this theme, with the aim of appealing to target populations and to maximize its reach. Dubbed, “Ito ang #TamangPanahon #HIVTestingDay”, this HIV testing day campaign sends out the message that getting tested and finding out one’s status now has never been more timely.

Capturing the Right Market
Over a hundred turned out at the LoveYourself HIV testing day last November 29 to find out their status. The prevalence rate was at 10%, which is much higher than the national figure of 0.1%. The prevalence rate for MSM’s across the country as mentioned by UNAIDS is 5-8%.

The HIV testing day’s rate of 10% more or less matches the rates obtained from previous HIV testing days, which is a good indicator that LoveYourself campaigns effectively reach out to the right population.

The Philippines is one of a handful of countries experiencing a sharp rise in the rate of HIV infections. To date, 22 Filipinos get infected with HIV on a daily basis; whereas in 2006, only 1 Filipino acquired the infection daily.

Online Campaign, Many Thanks to Social Media Partners

As one of its internal campaigns, LoveYourself volunteers as well as non-members changed their profile photos of themselves doing the #pabebe wave. The hashtag, #TamangPanahon (literally meaning “The Right Time”) as well as the #pabebe wave are signature motifs from local TV network GMA-7’s all-time-hit series, Kalyeserye, featuring the supercouple Alden Richards and Yaya Dub (AlDub).

External campaigns included boosts on Facebook of the event as well as message blasts on social media apps that are most commonly used by the gay and bisexual male community, Grindr and Hornet. A blog entry announcing the HIV testing day was also posted on online dating site, PlanetRomeo.

Grindr offered its blasts free of charge as part of its donation to the said event, while Hornet partnered with LoveYourself in lieu of observing World AIDS Day (December 1).

LoveYourself public relations team also coordinated with popular LGBT blogs and online magazines in posting entries of the HIV testing day. Outrage Magazine, the Philippines’ only LGBT magazine, known for bringing to light LGBT stories and raise awareness on LGBT rights and issues, made a post about the HIV testing day.

The collaboration with strategic blogs ensured a diversified reach, capturing audiences of varying lifestyles and sexual orientations and identities. Meanwhile, blasts and entries on popular M2M sites and social apps were very much effective in reaching out to this particular group.

Together with financial and medical assistance from the Research Institute for Tropical Medicine (RITM), a DOH-designated HIV treatment hub in the country, resources and provisions, from social media campaigns to logistics and volunteer meals, were properly mobilized.

LoveYourself is a non-government and non-profit HIV awareness organization comprised of volunteers mainly from the LGBT community. The organization is grateful for its partners and donors who help in providing financial and material impetus for furthering its goals of fighting the HIV epidemic in the Philippines. 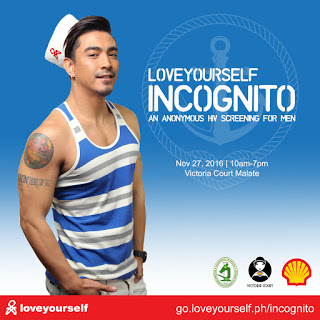 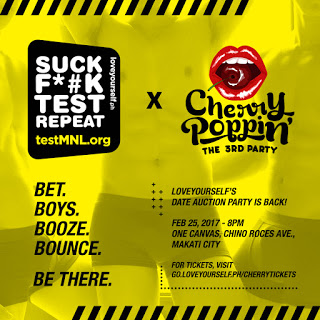 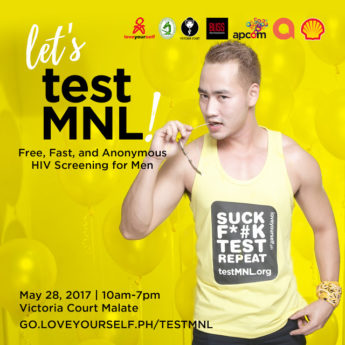 Prep for Let’s TESTMNL! – Community Based Screening: What is it and how is it done?