HIVisions – A Youth in Crisis: HIV/AIDS and Awareness 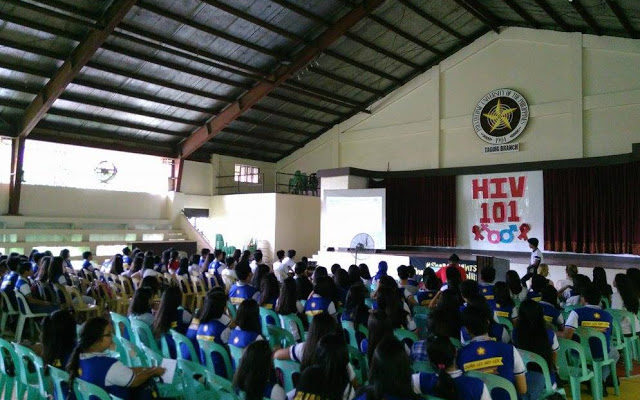 The HIV crisis has gone on for four decades, and for four decades the world has struggled against it. Doctors, scientists, educators, policy makers, writers, artists – people of all walks and all colors have, in their own ways, sought to make sense of this crisis and its relationship with society. From citizens to states, from medicine to prayer, from cures to cries for reform, people’s visions of how to respond to the crisis are as diverse as the people who bear its scars. The goal of this series is to give you a glimpse of these visions: the roles people of different passions and disciplines have played in this crisis that, as of January 2017 as recorded by the Department of Health’s Epidemiology Bureau, is infecting 28 Filipinos daily.

The HIV crisis in the Philippines requires urgent attention due to increasing rates of HIV infection, in contrast to a worldwide trend of plateauing or decreasing rates. Moreover, of the 26 Filipinos daily who contract HIV, 8 of them are aged 15-24 years old1. The age group contributing to the biggest proportion of cases has also become younger, with the 25-34 years age group accounting for more than half of detected cases, with the 15-24 years age group trailing behind at 28%.

The Philippine government has enacted legislation aimed at increasing the effectiveness of intervention2 as the face of the epidemic in the country changes with the median age of People Living with HIV (PLHIVs) getting younger. Globally, young people are considered most vulnerable to HIV/AIDS infection. This situation is a result of a general lack of correct knowledge about HIV/AIDS that can be addressed by reproductive and sexual health education and other socioeconomic circumstances that expose the youth to risky behavior3. In fact, a Young Adult Fertility and Sexuality (YAFS) study in 2014 reports that 14% of Filipino girls aged 15 to 19 years old are either pregnant for the first time or already mothers4. Four percent (4%) of 15-24 year olds infected with HIV are females5.

Knowledge of HIV/AIDS and Sexual Attitudes

A paper prepared for the 2004 Annual Meeting of the Population Association of America by Elmer Laguna from the University of the Philippines Population Institute gives us insights on the knowledge of Filipino youth on HIV/AIDS and its impact on their decision to engage in various sexual practices. Laguna cites the AIDS Risk Reduction Model which states that being correctly informed on reproductive health is the starting point from which one is able to make commitments in changing one’s risky behavior and enacting solutions to perform low-risk behavior6,7.

Findings from the study revealed that awareness of the existence of a disease known as HIV/AIDS is universal among the youth, but misconceptions about the disease exist for a sizable proportion of the sector. More than a quarter believe that HIV/AIDS is a punishment from God for people who have sex outside marriage. A significant proportion also mentioned that AIDS is curable, and more than half believe that only persons with multiple sex partners are at risk of acquiring the virus8. In 2016, the increase in HIV cases among the youth is indicative that the level of knowledge of HIV/AIDS among the youth still needs urgent attention.

Linked with HIV/AIDS knowledge are prevailing sexual attitudes and behaviors. Elmer Jose from the Department of Psychology of the Polytechnic University of the Philippines conducts a study on these on respondents aged 15-24 years9. Cultural mores on premarital sex stemming from the country’s Catholic background is noteworthy as high percentages of respondents hold sex as sacred and must be reserved after marriage. In spite of the significant reservations against premarital sex, more than a quarter of respondents reported having had premarital intercourse, with 80% having not used condoms – an overwhelming majority.

Cross-linking findings from Jose and Laguna’s studies, the influence of religion is a palpable force in shaping people’s attitudes towards sex and HIV/AIDS. Quite ironically, Laguna reports that Catholic respondents are generally more aware about the existence of HIV/AIDS. Consequently, the view that HIV/AIDS is a punishment for those who engage in sexual intercourse outside marriage is prevalent and may be a reason for someone to feel stigmatized about activities geared towards HIV/AIDS awareness and understanding — from talking about one’s sexual behavior to getting oneself tested and receiving treatment. Secondly, the alarmingly low rate of condom use among respondents who reported engaging in sexual intercourse whilst being aware of HIV/AIDS is a worrisome contradiction that puts into question the effectiveness of reproductive health education programs10.

Condom Use and HIV Testing Among the Youth

The study revealed that there are more barriers than drivers for using condoms. Access to condoms and lubricants, knowledge and awareness about HIV, and perceived risk determined whether or not respondents used condoms. Moreover, personal motivations drove respondents to use condoms for protection or abandon them for sexual pleasure. Social perceptions centering on the “cleanliness” of their partner also determined condom use.

Of the numerous factors the study considered, love and romantic relationships, and spontaneity, or “heat of the moment” sex, are barriers that had no corresponding drivers. “Here, the meaning of being in a relationship and not using a condom to show trust and fidelity becomes the barrier to condom use12”. In other words, personal motivation towards safety and cleanliness is overpowered by multiple barriers including personal motivations towards sexual pleasure, love and romantic relationships. Finally, the spontaneity of sex implies that the physical urge to have sex is a barrier to condom use13.

Similarly, there were more barriers than drivers for getting tested for HIV/AIDS. Access to services, knowledge and awareness of HIV/AIDS, and perceived or felt risks of acquiring the virus determined whether or not respondents got themselves tested. On the level of personal motivation, it was either respondents wanted to validate their negative status or were prevented by fear of finding out their HIV/AIDS status. Stigma associated with HIV, however, is a barrier to testing that had no opposing drivers14.

The study clearly reveals that there were consistently more factors barring people from using condoms and getting tested for HIV/AIDS than factors driving people to use condoms and getting themselves tested for HIV/AIDS. As a response to these findings, the study recommends a model for awareness intended for the general population, including the youth, with the goal for effecting behavioral change. In order for knowledge and awareness to be instilled effectively, the model identifies three levels of knowledge: conceptual knowledge which makes HIV understandable, social awareness of the reality of HIV, and personal awareness of PLHIVs15.

LoveYourself has an initiative called LoveYourself Caravans, an HIV/AIDS awareness campaign which includes conducting HIV101 and on-site testing at universities and colleges and workplaces. In response to the growing rate of infections among the youth, LoveYourself Caravans is increasing the number of schools it targets to collaborate with on-campus awareness programs. In light of the three-tiered awareness model recommended by DOH’s 2015 qualitative study, we ask LoveYourself Programs Officer Earl Patrick Penabella to see where LoveYourself Caravans’ programs stand.

The HIV101 modules conducted by LoveYourself attempts to address an awareness program’s requirement to instill conceptual knowledge, and to a certain extent also instill social awareness through videos and group dynamics alluding to the reality of HIV/AIDS. “Social awareness though is difficult to quantify; its end results are more qualitative in nature,” says Earl. He admits though that the the capacity of LoveYourself’s HIV101 programs to raise personal awareness still leaves much to be desired. “The program can consider sharing testimonials from PLHIVs, who can talk about their experiences before students and educators,” muses Earl.

An integral part of LoveYourself Caravans’ campaigns in colleges and universities is advocating the use of condoms, a topic that is not well received in secular institutions. Earl reports that 4 out of 5 schools denied the program from distributing condoms and demonstrating its usage, relegating learning about the contraceptive tool to Powerpoint slides. “There are a few ways we can go around this setback – LoveYourself has tools to ensure that we do get the message across. The most basic expectation of an awareness campaign is to move the audience one notch up – which means if they have zero knowledge, then it is to equip them with the knowledge,” he explains.

A partner of LoveYourself Caravans is the Ateneo entity of the Association for the International Exchange of Students in Economics and Commerce (AIESEC), a worldwide organization developing the leadership potential of the youth through experiential learning, volunteer experiences, and professional internships17.

Being an international exchange organization, Project tHrIVe allows foreign volunteers, which the entity calls as “Exchange Participants (EPs),” to experience LoveYourself operations by spending a few days working at its clinics. The program lasts for six weeks, and the EPs are made to work with various organizations including LoveYourself, educating the youth about the dangers of HIV/AIDS transmission, working at its testing sites, and participating in events that the organizations may have.

Project tHrIVe with its hands-on approach to learning allows its participants first-hand encounters with clients at LoveYourself’s clinics. “Our EP’s time volunteering in LoveYourself Anglo really helped them to see the nerve-racking effects of having HIV. It made them want to educate the youth even more, because they know that it is the only way to lessen the number of people experiencing these emotions,” shares Nicole Ngo, lead of Project tHrIVe. Despite the impact the program bears on its EPs, the program is not without its limitations. “We often encounter logistical problems, and coordinating with various organizations can be difficult,” says Nicole. Moreover, the project head admits there is a need to be more stringent with the attendance of EPs. “Most of the EPs are traveling to the Philippines for the very first time and would also like to travel around the country. We do have to remind them that they come here first and foremost for the project, and sightseeing can come second.” A more obvious limitation would be the very nature of AIESEC itself as an the international exchange program –  the EPs who participate in Project tHrIVe are foreigners.

“This is why I’m thinking of proposing an on-the-job training program with our school partners,” says Earl. As the urgency to safeguard the youth from HIV/AIDS increases, there is a need to continually improve awareness programs starting from the basic HIV101 module. A group of researchers led by Dr. Emmanuel Baja at the University of the Philippines-Manila under the Newton Fund Program of the government of the United Kingdom are investigating the development of a virtual reality gaming application with HIV/AIDS and other STIs as its theme with the aim of promoting awareness of HIV/AIDS and testing in the Philippines18. The example given by this initiative as well as Ateneo-AIESEC’s Project tHrIVe highlight three levels of learning – conceptual, social, and personal. Moreover, the ever changing face of the epidemic requires a vigilance from advocates conducting awareness campaigns and constant innovation to ensure that the programs instill awareness and knowledge more effectively, and more members of vulnerable sectors are reached.

HIVisions’ A Youth in Crisis will continue with more stories of noteworthy efforts from LoveYourself’s partners from the academe in its advocacy of HIV/AIDS awareness, testing, and prevention.