The TWINK-le in our Eyes Breaking Barriers in This is Me: Brave and Free!

The stars are certainly aligning! We feel the increasing support of the community as  the Philippines’ first community-led multi-site HIV testing day on May 26, 2018 comes nearer. Two young souls shine brighter as they step up to let the world know about inclusivity, equality, and taking control of our sexual health – Elcid Lao, a professional sales representative and entrepreneur, and Aldwin Chester Amolat, a senior high school graduate from Malolos, Bulacan and a young HIV advocate.

Elcid Lao, often called as Cidoi, is a 31-year old entrepreneur and sales representative from Makati. As a young professional in the metro, he decided to join the campaign as he sees this as a platform to showcase diversity within the LGBT community. Acknowledging the fact that we all live in a world where HIV is present, Cidoi believes that diversity should be anchored with acceptance rather than segregation. “This campaign targets people that are branded as aloof and not part of the society. This advocacy aims to educate the people. It’s more of people’s acceptance on how they handle different types of people in the LGBT community. We will be able to at least tell them and inform them that we don’t need to have segregation in the society”, he said.

Being Brave and Free

The powerful theme resonates personally with Elcid as this is his coming out statement to the world. He displayed a great deal of courage in joining the campaign to encourage everyone else to claim their personal freedom. Being brave by speaking up and declaring his own identity, he finds himself free like never before.  “First of all, I was very discreet. Through this, I can at least express myself and let them know that it’s time – this is the time that we need to accept (me)”, Elcid claimed.

Aldwin explained how everyone should be responsible of their sexual health and why it matters to be educated even at a young age. “I decided to join to spread awareness, na hindi lang sa bisexual and transgender—para sa lahat lalo na sa kabataan. Para aware sila habang maaga sa status nila at para magkaroon sila ng knowledge about HIV”, Aldwin shared.

Both Elcid and Aldwin expressed that true courage starts with yourself, nurturing freedom, and finally caring for others. Awareness starts with self and expands more and more as the influence is shared with genuine thoughtfulness for other people.

Shouting out THIS IS ME!

Both dashing personalities share how important  HIV testing is – awareness. It is the first step in taking control of your own sexual health. Elcid encourages everyone to act now. ”Through HIV testing, we can be knowledgeable enough and brave enough to handle this kind of situation. It’s better to brave and free by testing – to know your status and let them see that there is really nothing to be afraid of,” Elcid stated.

Elcid even opened the discussion about what makes us human, caring for each other, “Don’t be afraid. Be yourself. Know that this stigma is not really a big problem for us. Show the world that you have the inner strength in you not only to protect yourself but to protect others that are being affected by the wrong stigma. Have regular testing, know your status and show them that we can handle this.”

Their message of urgency and personal courage is enlightening for a conservative country like ours. With knowledge and genuine care for each other, we can surely win the battle against HIV. This can start with a single test.

The stage is set for you, lovers. Join us at This is Me: Brave and Free – the first community-lead multi-site HIV testing day launching on May 26, 2018. Join in the celebration of self-care by bringing your courage to community based organizations (Juan Positive Movement, HIV & AIDS Support House, Inc, Decent Image of South Signal Association, Cavite Positive Action Group, GAYON, Project H4, Kagay-an PLUS, and Olympus Society of Davao) alongside LoveYourself (LoveYourself Anglo, LoveYourself Uni, and Victoria by LoveYourself). Get to know your status with the fast, free, and confidential community based-screening process.
Go to https://bitly.com/ThisIsMe2018 to sign up and you’ll receive a confirmation notice in a few days! 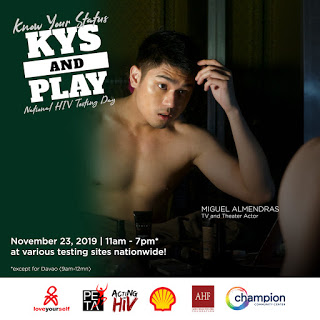 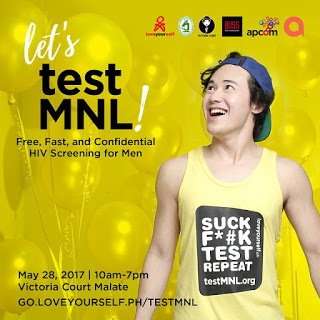