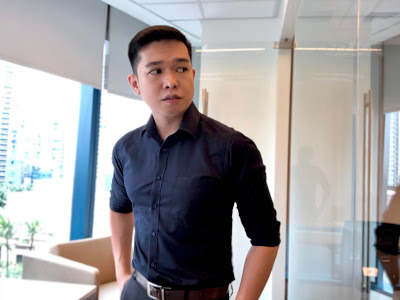 It was the year 2016, and it had been a few months since Robin’s mother, Violy, passed away. She had breast cancer, but it wasn’t the cancer that killed her. She was, in fact, responding well to treatment and had lived longer than the doctor’s prognosis. No, she didn’t die of cancer. It was a fire that, although she survived, caused her health to falter and took her away from her only son. It was also the same fire that burnt down the home they had lovingly built together over the years.

It had been a few months since Robin’s mother passed away, and her son, in his prime, did not know where to begin. Robin thought to himself, “There’s no purpose. Why would I build this? For whom?” But he did rebuild that house and so much more. Surely, he’s done his mother proud.

Fast forward to two years later, inside his office on a rainy June day, with only the pristine walls as witness, Robin, holding back tears and dressed in his crisp deep blue shirt, told me how he did it. It wasn’t easy, but he did it.

When It Rains, It Pours

To say it has been a rough few years for Robin Marero is a gross understatement. The 29-year-old community manager and LoveYourself volunteer had to say goodbye to a parent and to a home a couple years ago, and although he’s smiling today, the devastating loss has left an unfillable gap in his life. Nothing, after all, can replace a mother’s love.

Months after his mother was diagnosed with stage 4 breast cancer in 2015, Robin and his family faced yet another untellable tragedy. Their home caught fire and overnight turned to ashes. Violy, who then had been responding well to chemotherapy, had another battle to conquer.

Despite the snowball of misfortunes, Robin held on to hope and showed nothing but strength to his ailing mother. With a younger sister who died at age 4 (Robin was 7 then) and a mostly absent father, it was Robin and his mom against the world. “Day 1, when I found out my mom was sick, immediately it was stage 4. There was no support group. I was the only one. I was the only son, and I didn’t have my father with me. So whenever I looked at my mom, I needed to be strong,” he confessed.

The months that followed saw the inseparable mother and son battle cancer and start over together, until one day when Robin was left to pick up the pieces on his own. In September 2016, Violy passed on.

During those times of adversity, Robin also looked inward and evaluated his life. Perhaps the imminence of death, yours or a loved one’s, can do that. “The main reason I joined LoveYourself was because of my mom. When my mom got sick, I just felt like I had to do something more than what I was doing.”

Robin’s mother passed away shortly after he joined LoveYourself in June 2016. And while his rock and number one supporter was no longer with him, Robin found a new family that made the rough roads a little easier to navigate.

“LoveYourself became my support group. I never really thought joining LoveYourself would help me go through the things I’ve been through… I cannot express how the organization has helped me. Even Vinn and Chris (LoveYourself founding members), everyone, they went to the wake. I was very new to the organization. I didn’t really know anyone, just my batch mates. I was overwhelmed by the support. I never thought they’ll be my family.”

He added, “During those two years of my mom’s illness and medication, there was no chance for me to cry in front of my mom. The only time I cried was when I had a support group, which was LoveYourself.”

It wasn’t just a community that Robin found in LoveYourself. Through the organization, he also met his partner, Francis. “Before my mom died, Francis and I became a couple, so my mom met Francis,” he shared. Since then, Robin and Francis have become partners in life as well as in the advocacy.

All that support and love helped Robin start not just healing his wounds but also rebuilding the house he and his mother lost. After toiling away for two years, the house is now finished and waiting to become a home. He said, “My mom was there when we were rebuilding it. But when my mom died, I stopped for three to four months because I didn’t know how to start. I thought, ‘There’s no purpose. Why will I build this? For whom?’ But being with my partner now makes it a lot easier because it has a purpose. Joining LoveYourself also gave me purpose in living.”

An experienced choreographer, Robin used his keen attention to detail and knack for planning when he started out as a coordinator. Soon enough, he learned the ins and outs of events management. He remarked, “Doing events is really hard. The expectation of the organization is high, but I don’t look at it as a challenge because it makes me happy when I do those things.”

His readiness to take on bigger responsibilities was tested as he spearheaded LoveYourself’s 2018 Summer Camp, an out-of-town gathering of volunteers to foster camaraderie and increase volunteer engagement, last April. Robin had to jump through hoops and hurdles to make the logistically demanding event happen. He recounted, “Two weeks before the event, I was still thinking if we should push through because there were only 20 people who signed up. We were targeting 70, and that’s a lot.”

But Robin pushed on and arranged, along with his team, the transportation, accommodation, food, and materials needed for the event. He tapped volunteers to spread the word despite several challenges, like people’s conflicting schedules and budget constraints. With much hard work, however, his team pushed the numbers up to 65 attendees. “It was fun. I can say it was successful because of the number of people who joined. I think I accomplished all I had to accomplish.”

Needless to say, the event turned out to be a huge success, and once again, Robin was reminded of why Events is a critical arm in any organization. “As Events, I think the main purpose of this committee is to develop camaraderie and volunteer engagement because, just like Vinn said, every volunteer is the heart of the organization.”

Robin is also an HIV counselor and aspires to be a life coach in the future.

When I joined LoveYourself, I didn’t take any trainings because my mom died, so I thought I wasn’t mentally and emotionally prepared for handling clients. It took one year for me to decide to take the training for counselors.

His very first client turned out to be reactive for HIV, and Robin used the strength and compassion he learned from his experiences to handle the situation. He continued, “I was already emotionally ready for that because I already had my past behind me, but it brought back some emotions. It was really hard, but you need to be strong for them. I think I already had that because my mom taught me to be strong, so I already had this kind of attitude: ‘Let’s face the reality. Let’s move on. Let’s have treatment.'”

It has been a rough few years for Robin, yes, but they are not without their victories and life lessons. Fresh from celebrating two years in the HIV advocacy, he has a few thoughts to share with current and future volunteers.

“I think, when joining an organization, you should already have certain qualities, like being friendly. I think one of the things that makes me who I am now is because of the things that happened to me in the past. It’s really easy for me to connect with other people’s lives. If you have this growing up, it will be easy for your to join an organization because a simple smile can brighten up a day.” He added, “You need to be sensitive if a person has been going through a lot of things. I think you need to be sensitive for you to be able to become an efficient volunteer.”

Another thing he stresses is staying true to your reason for joining the advocacy. He explained, “Always look back at the reason why you joined. Eventually, time will pass and you may forget the organization because you have a lot of things to do. Then one day, someone will go to you and tell you they are HIV-positive or they’re going through this kind of illness, and then you go back to your organization and think of  the main reason you joined. I think it will bring back the fire. So just always look back on the first day, the reason why you joined.”

Above all else, Robin lives every day following his mom’s advice: “Always be strong, not for yourself but for the people around you.” His strength, resilience, and compassion has brought him this far and will surely bring him further.

He concluded by sharing, “I’m still not completely over my mom’s passing. I still have this thinking: ‘What is all this for?’ But whenever I go back to everything we shared–because it was always just me and her–I believe she already planned all the things that will happen to my life so that when a difficult time comes, I’ll be ready to face anything. I’m ready to face anyone and anything, not only for myself but also for all the people who surround me and need my help.

“I feel like I was born not for my mom but for all the people who need my help because I can say that I’m really strong – in terms of pain, in terms of rejection, in terms of anything.”