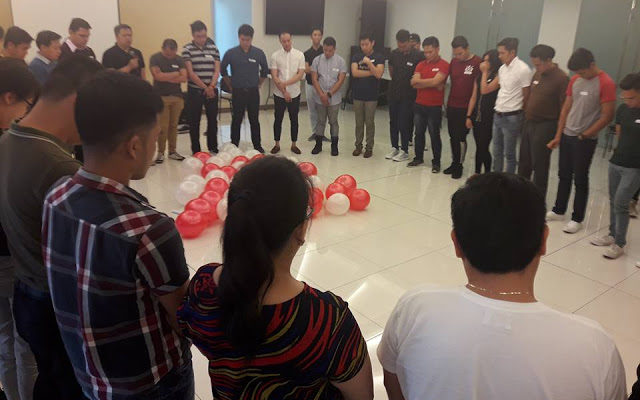 Fresh faces dotted the People’s Hall of SM Aura Premier last April 8 as LoveYourself welcomed Batch Guinto, this year’s first set of recruits. Rising up to the call of being HIV awareness and prevention advocates, 42 individuals underwent a thorough screening process and are now on their way to creating ripples of positive change.

The Recruitment team, headed by Pete Tan, oversaw the screening and the interview of the applicants. The orientation was then headed by Bien Salaza of Love U: The Corporate University of LoveYourself, with the help of volunteers from the various committees. Co-founder Chris Lagman and Love U Chancellor Danvic Rosadiño spoke of what it is like to grow in LoveYourself as a volunteer and what to look forward to as one journeys with the organization. Seasoned volunteers also shared their experiences with the new batch with the hopes of igniting a passion for volunteerism that sustains.

LoveYourself’s historic mother clinic was the inspiration behind the batch name, Guinto. First dubbed as LoveYourself Hub, the organization’s primary base was located at the busy streets of Leon Guinto in Manila. The hub opened on July 21, 2012 but was only initially open during the weekends since the Research Institute of Tropical Medicine (RITM) used the venue as its satellite clinic during the weekdays. On June 2013, however, due to the increasing number of clientele and increments in the daily new cases of HIV, RITM transferred the full operation of the hub to LoveYourself. Vinn Pagtakhan, founder, shared a few trivia about the iconic first hub:

Another ode to heritage is the logo of Batch Guinto. Gathering inspiration from the weekly illustrated atlas of the “Windows of New York” project, Geno Maglinao, Head of Creatives, conceptualized the logo as a remembrance of what the clinic used to look like. Like the original clinic, the facade has two glass panes and an ornate barricade that separates the sidewalk from the main street of Leon Guinto. The exposed glass pane on the left is the entrance, while the right glass pane is hidden by a steel roll up door. This portion was always kept hidden since it was allotted for counseling sessions.

The notable difference between the logo and the actual hub is that the name Guinto replaces the original marquee, which contains “RITM Satellite Clinic.” In illustrating the batch logo, the artist “pays tribute to the hub that was the witness to the organization’s humble beginnings” and with it, volunteers new and old alike, are “encouraged to look back to where we started, so it could give us renewed enthusiasm in the advocacy.”

Pushing the total number of volunteers to around 700, Batch Guinto adds new flavors to the organization. Through its partnership with Test MNL, Pilipinas Shell Foundation, ISEAN HIVOS, RITM-DOH, and the Taguig City Government, LoveYourself aims to continue expanding its reach in terms of the number of people involved, the timeliness of its affairs, and the sustainability of its programs.

As we trace back the roots of our beloved organization, we are again reminded that volunteers are the fuel that sustains the drive in the cause they advocate. With the increase in numbers, volunteers, seasoned and budding alike, are encouraged to help man its two clinics (LoveYourself Anglo at Shaw and LoveYourself Uni at Taft) and to engage in the various committees of the organization.

In the words of our dear founder himself, Vinn Pagtakhan, “More than a memory of the first community center, Guinto means gold. Gold reminds me of one of my favorite Chinese proverbs: ‘Anyone can find the dirt in someone. Be the one that finds the gold.'”

Valentines in a Safe Space

LoveYourself To Open Home in Cebu to Combat HIV