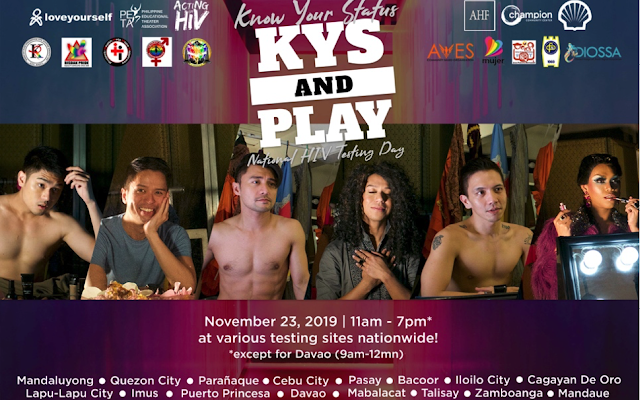 MANILA – In celebration of the World AIDS Day on December 1, LoveYourself, Inc. and the Philippine Educational Theater Association (PETA), together with 10 community-based organizations nationwide, will conduct a national HIV testing day on November 23, 2019.

Dubbed as “Know Your Status (KYS) and Play or #KYSandPlay2019, this national HIV testing day entails a free, fast and confidential HIV test at 19 test locations nationwide for registrants to this link: bit.ly/KYSandPlay2019.

Fabregas relayed, “It’s so important to have HIV represented in theater, hopefully in all art platforms. I remember when we did Normal Heart, you’ll be surprised at how so much people don’t know [about HIV].”

Relatedly, Marquez explained, “When you’re getting tested, it’s a win-win situation if you think about it. If you’re negative, you know you’re practicing safe sex correctly. If you’re positive, then you get to know what to do next.”

Gahol said, “There is strength in knowing the changes you need to face, to make good of whatever your status is. Know your status and you get to choose your next step. If we let fear take over, we allow the virus to choose for us.”

For Luzon, there will be four sites, including (1) Hero by LoveYourself in Bacoor and (2) Aves Love and Light in Brgy. Bayan Luma 4 in Imus, Cavite, (3) Lakan Community Center in Brgy. Lakandula in Mabalacat, Pampanga, and (4) Amos Tara in Puerto Princesa, Palawan.

#KYSandPlay2019 is the fifth of its kind HIV testing movement from various community organizations that is supported by Pilipinas Shell Foundation Incorporated, and AIDS Healthcare Foundation.

Pia Wurtzbach to Walk the Cebu Runway for the HIV Advocacy