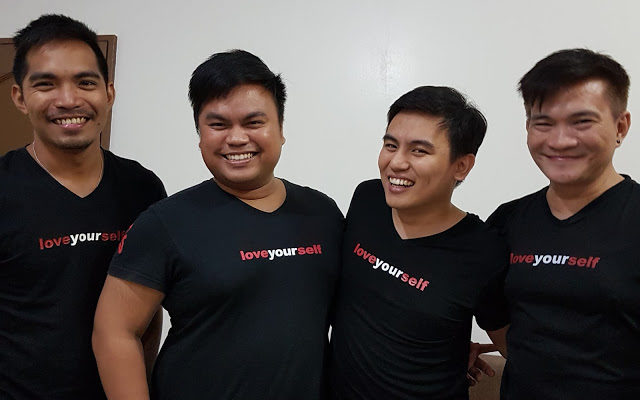 Ask anyone what the noblest profession is, and there’s a good chance they’ll say “educator.” It should come as no surprise. Educators, after all, are assigned the Herculean task of shaping people’s minds. While not all bearing the title are able to live up to the high standards of their calling, there are those who go above and beyond to fulfill their duties.
In LoveYourself, educators exist, too. Counselors, for example, put hours into training, so they can educate their families, friends, and clients about HIV. What most people outside the organization may not be as familiar with, however, is Love U: The Corporate University of LoveYourself, which serves as the learning hub for all of the organization’s stakeholders.

Through Love U, individuals inside and outside the organization can expand their knowledge about HIV and matters like SOGIE (sexual orientation, gender identity, and expression) and self-worth. Aside from providing learning and training opportunities, Love U also conducts volunteer engagement and community engagement activities to ensure a holistic learning experience for all.

Sounds like a lot of work, doesn’t it? Well, it is. Fortunately, four people with bright minds and big hearts have taken on the tall order of leading Love U.

Danvic believes the best way to educate yourself about HIV is to get tested. “They can share their personal experiences to their friends, especially to those they know are at risk of contracting HIV.”

Before climbing the ranks and becoming Love U’s Chancellor, Danvic started out as a volunteer counselor. His entry to the organization in 2014 was inspired by his own experience with LoveYourself. “I had my first HIV testing at LoveYourself, at a Mass Testing event. Ever since, I have admired how these people work, especially when I found out they were all volunteers,” he shares. From counselor, Danvic became the Dean of Learning and eventually took on the role of Chancellor. He is also currently the ​Data Manager for Project PrEPPY (PrEP Pilipinas​). He tells us, “I could say I got there because of my passion for the advocacy and my dedication to help others, because that was my aim from the start – helping others.”

As Chancellor, Danvic oversees the entire university, a task he describes as both exciting and challenging. “Running a mini-university is challenging as you need to develop activities, learning sessions, and other materials that will cater to everyone. The fact that we are running a ‘university’ is exciting, too! Hey, we don’t have a PhD in Education, but we are doing our best to serve our students!”

Danvic’s dream was to become a university professor, and he considers his role in Love U as something similar. He says, “Basically, I’m teaching, and I am living my dream. It has super changed me. It’s like I have proved to myself that I don’t have to be phenomenal in order to do phenomenal things. Whatever I achieve while doing this advocacy work, I will be very much grateful for it. Whatever I do for myself stays within me, and whatever I do for others remains and will be eternal.”

For those wanting to join the advocacy, Danvic believes in these three necessary Cs: competence, compassion, and commitment. With these three things, it won’t be impossible for volunteers to live their dreams, just like what Danvic’s doing.

Ruben says you can best educate yourself about HIV by being open to discussing it, not judging and discriminating others, and continually learning through seminars, trainings, and reliable articles.

Ruben had an unlikely motivation when he joined the organization in 2012. While getting tested at LoveYourself, he became interested in acquiring a volunteer shirt, which he described as “simple yet classy.” After being told it was only available then to volunteers, he decided to join the group. “Am I weird? But that’s the truth. But when I started the training and counseling, my motivation changed,” he confesses.

From that simple beginning, Ruben grew to be an active volunteer. He currently serves as Love U’s Dean of Learning, responsible for trainings and knowledge transfers. He is also a member of the Communications Committee where he contributes articles, and HIV Operations where he is an HIV counselor, life coach, and the head of Project Purple (HIV testing and counseling for couples).

Out of all his tasks, he finds being a trainer as the most fulfilling. “I aspired to be one of the trainers of the organization, and here I am fulfilling my aspirations.” And the most challenging? Counseling and coaching. “If your client turns out to be reactive, you serve as the conduit of information and all things necessary from testing to treatment, and that’s why I always tell myself that volunteering as a counselor is more than a privilege. It is a responsibility, a responsibility in which you offer your commitment to prioritize your client more than anything else,” Ruben shares.

Ruben has great dreams for the organization that may seem bittersweet: “To be honest, I would like the day to come that LoveYourself is no longer needed in the country. Don’t get me wrong here. I would love to see the organization disappear with grace because people are well-informed about HIV and AIDS, there are no more new infections, no more discrimination and prejudice towards PLHIV, no more PLHIV who are lost in treatment, and no more HIV.” But until then, Ruben continues his advocacy work. And for those who are interested in volunteering, he has this to say: “I hope you join LoveYourself, or any other HIV advocacy, not just because of T-shirts but because of the cause. And when you are inside the advocacy, give your heart to it.”

Leo says one should “read discerningly, get tested, and protect oneself” to be best educated about HIV.

In 2014, Leo was a client for LoveYourself’s mass testing event in Victoria Court. Seeing the work of volunteers during the event inspired him to join the organization, so he can give back to the community that has nurtured him.

Since 2015, Leo has been serving as a counselor and life coach. He has been working closely with HIV-positive clients, “assisting them to accept their status and to be treated.” He considers being a life coach both fulfilling and challenging as he is usually helping out his clients even outside his volunteer duty hours. Leo is also the Dean of Development for Love U, through which he gets involved with communities outside the organization, and a member of the Events and Recruitment Committees.

Leo’s LoveYourself journey so far has changed him for the better. He says, “I have become more outgoing and at the same time focused on this advocacy. I am grateful I am able to help the community in any way that I can.” And he has high hopes for the organization, too. “I wish volunteers stay longer with the organization, that we are able to champion sex positivity and inclusivity even more, and that more people would get tested and treated at LoveYourself.”

For Leo, it’s important for volunteers to know why they do what they do. “What we do is honest to goodness hard work and dedication.” He adds, “It does not matter what your status is, how mature or young you are, how beautiful you are outside and inside, how wealthy you are, or what you are struggling with. LoveYourself is an organization that will help you grow further as a person, as a Filipino, and as a citizen of the world.”

To get the right information about HIV, Aaron advises: “Visit TestMNL.org, that’s it. All information can be found in their website.”

Aaron was also once a client of LoveYourself, and his experience encouraged him to join the group in 2014. He shares, “I got inspired by what the counselors were doing for their fellow LGBT friends, volunteering their time for the community. Also, four of my close friends are PLHIV, so I wanted to be a volunteer because of them. I told myself, ‘I want to do the same. I want to help and to put my efforts and spare time to good use.'”

Today, Aaron serves as Love U’s head of Executive Administration, taking care of matters like coordination, documentation, and logistics for the university’s initiatives. He is also an HIV counselor and the representative of his volunteer batch. “I usually do counseling during my days off from work. The most memorable day for me as a counselor was February 8, 2015 (First General Assembly for 2015) because on this date, I was awarded as the very first Top 1 Counselor of LoveYourself Anglo during its first year running as a testing facility,” he tells us.

Aaron finds being a counselor the most fulfilling and the most challenging role. “In a way, I feel that I’m helping change their lives. I also believe in the saying, ‘Do something today that your future self will be proud of.'” He adds, “Eighty-two of my clients turned out to be HIV reactive, and I’m happy to say that 90% of them are undergoing treatment.”

Volunteering has done much for Aaron as it has for the community he serves. “It boosted my self-worth as a human being, and I’m fulfilling my dream of doing something worthwhile, not just for myself but for my community as well.” Right now, he feels content with his achievements in the organization and describes the volunteer experience as something “truly wonderful.” He concludes, “Yes, it can get tiring, but when you’re with your fellow volunteers, it feels good because they’re like your family. Yes, I see LoveYourself as my second family, my second home away from home.”

There’s still a lot of work to be done for the advocacy, but it goes without saying that Danvic, Ruben, Aaron, and Leo, along with their fellow volunteers, have done much for the cause. Despite the common misconceptions about HIV (like HIV being a death sentence or being a gay disease) and the challenges in educating the community (like the stigma, discrimination and conservative culture) that they pointed out in our interview, they continue to tirelessly serve with their bright minds and big hearts. Truly, they are noble educators in their own right.

LoveYourself Volunteer Spotlight is a monthly feature on the cause- and service-oriented members of LoveYourself. We will be chatting with volunteers from all walks of life – all united in one cause. Keep checking every month to meet the different faces of LoveYourself.

Have you been inspired by the courage and commitment of our volunteers? Like us on Facebook and help share our message of positivity and self-worth in your own communities to help fight the spread of HIV. 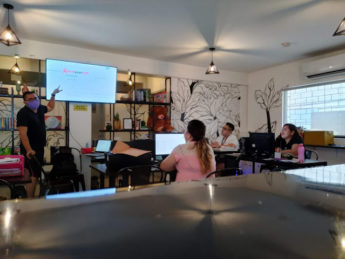