It’s lights, camera, action for the Wandaring Trio, this Friday. Mikoy, Macoy, and Ms. Wanda discuss the top five Pinoy Teleseryes of all time, voted by our viewers! These shows have been so iconic for our viewers that even years later, they still callback to it. Special Guest Dr. Gerard Delos Santos also dives into the discussion with his Wild Confessions while viewers guess what’s inside Ms. Wanda’s mystery box. 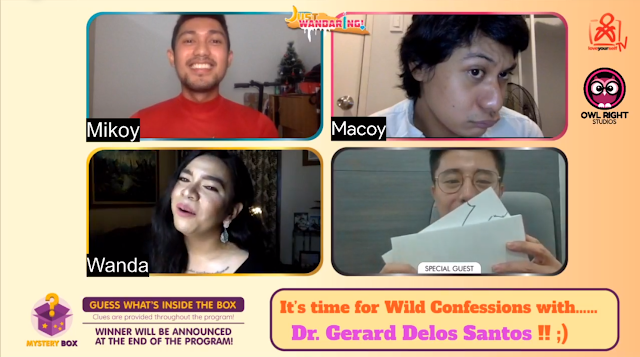 Mula sa Puso is a memorable piece of Filipino television. From its melodramatic romance scenes with its love triangle to the soundtrack, thousands of Filipinos who have followed its two year run through thick and thin. Even its rivalry with Esparanza was unforgettable sprouting a film and a soundtrack entitled Mula sa Puso ni Esparanza.

The longest running weekday drama in Philippine television comes number four in our list of top Pinoy Teleseryes. MaraClara released a film adaptation produced by Star Cinema in 1996. Its five year run has gone unmatched, even its reboot in 2010 only lasted a year. Truly, the original cast of Mara Clara will be remembered  for generations.

Taking number three in our list of top five Pinoy Teleseryes is Pangako Sa’Yo. Starring Kristine Hermosa and Jericho Rosales, the show was live on the air for almost two years! Thousands of Filipinos definitely found themselves kilig with the story of Yna and Angelo, as they followed each episode religiously. The show also received a reboot in 2015, lasting one year.

One mention of this iconic series, and you can hear folk singer Bayang Barrios’ chants and hymns as the brilyantes enter the screen. The story of the kingdoms of Adamya and Sapiro will forever be remembered in the hearts of Filipinos. This series is so iconic, that it received a cross over film with Mulawin in the Metro Manila Film Festival. In 2016, the show was rebooted, and received so much love.

A Kapuso show has taken our number one spot of top Pinoy Teleseryes. Starring Dennis Trillo, Tom Rodriguez, and Carla Abellana, My Husband’s Lover tells the story of a family man’s affair with his former lover. Through this affair, family man Vincent Soriano (played by Tom Rodriguez) rediscovers his sexuality as a gay man. In 2014, the show won Best Ensemble Performance (TV Series in the 12th Gawad Tanglaw Awards, and Outstanding Original Drama Program in the 5th Golden Screen TV Awards.

Curious about what the adorable Dr. Gerard Delos Santos revealed in his Wild Confessions? Are you itching to find out what’s inside Ms. Wanda’s mystery box? Watch the video above, and don’t forget to like, comment, subscribe, and hit the notification bell so you won’t miss an episode of Just Wandaring live every Friday at 8pm!

Batch Amuma: Taking its First Leap in Battling HIV and the Stigma that Comes with It